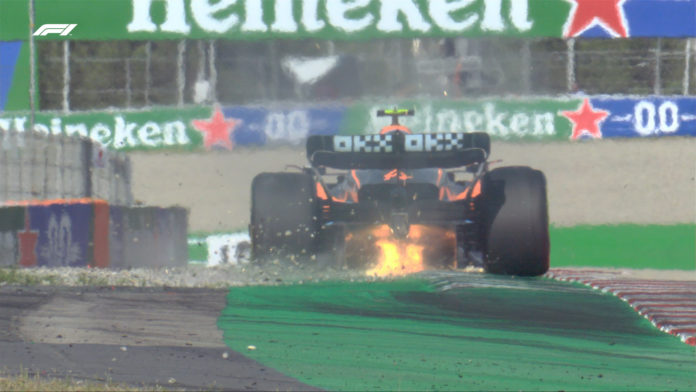 Lando Norris stated his FP2 was cut short due to a floor-damaging incident that made McLaren concerned about their limited supply of fresh components.

During FP2 at the Spanish Grand Prix, Norris drove the improved McLaren MCL36 through the gravel on a couple of occasions.

However, after only six laps, the final of those problematic occasions, which entailed a good smack of the curb, proved to be the end of the Brit’s practise.

McLaren was observed removing the improved floor from Norris’ car after the session, with the 22-year-old confirming that the decision was made not to risk more damage.

“I just ran wide over the exit kerb of Turn 9 and damaged the car,” he told reporters.

“I guess we’re quite limited on new parts so we wanted to make sure we saved them and didn’t do any further damage. It was just a misjudgement from my side, as simple as that.

“Apart from that, it has been a decent day. The car has been in a relatively good place but it looks like everyone is in a good place as well.

“I’m happy, it’s just trying to find the last little bits and putting it all together.”

Regarding the MCL36 upgrades, Norris said: “Most things have been working as expected, or as we have wanted them to.

“I don’t think anything has been acting funny or different to expectations, so positive.

“We had them on both Daniel [Riccardo’s] and my car for FP2, so good. We’ll go through the data, make sure we understand it all and we’re maximising the package for tomorrow.

In FP1, Ricciardo was in the top 10, but by FP2 he had dropped to P15. He confesses that this isn’t where he wants to be in the rankings, and he’s set his sights on returning to the top 10.