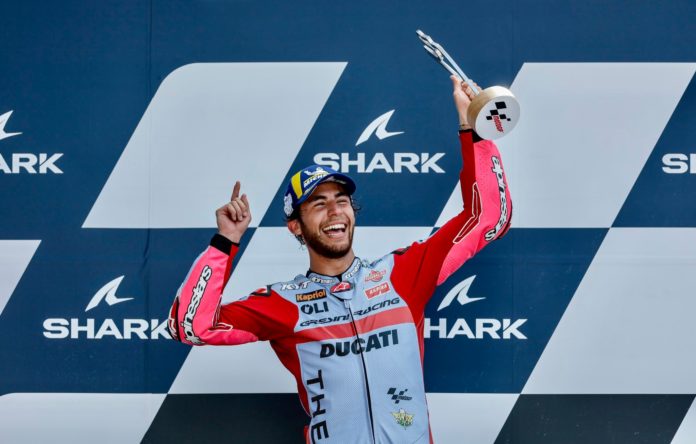 Enea Bastianini, the champion of the French Grand Prix, believes Francesco Bagnaia would not choose him as his Ducati MotoGP teammate in 2023 because “it could be a problem for him.”

Bastianini won the French Grand Prix at Le Mans on Sunday after a brief battle with Bagnaia, who made a mistake while leading on lap 21 of 27 and crashed out a few circuits later.

Bastianini won his third race of the season atop his Gresini-run 2021-spec Ducati, putting him just eight points behind the championship leader.

It also comes at a key time for his MotoGP career, since he is one of the favourites to replace Jack Miller at the factory Ducati squad next season, alongside Jorge Martin, who wrecked at Le Mans.

“I don’t know,” Bastianini remarked when asked by Motorsport.com on Sunday at Le Mans if he believed he was forcing Ducati to promote him to its factory team. I’m not in charge of Ducati.

“But I think my situation is better in respect to the other Ducati riders.

“Pecco yesterday said he’d prefer to stay with Jack as a teammate. And I think his decision, I don’t know if Ducati wants to listen to him.

“But, also in the case of staying at Gresini or other with a factory package I can be fast.”

“I think he favours Miller because he is the leader of Ducati and he knows the potential of me, and also because I think of Martin,” Bastianini said when asked why he thinks Bagnaia would prefer to keep Miller as his partner.

When asked about this, Bagnaia denied it, saying that he believes Bastianini deserves the call-up if it comes, and that if he had an option, he would prefer Miller because they have been together since 2019.

“Jack is my teammate form 2019 and I know him very well,” Bagnaia said.

“So, Jack is my first choice because he is a friend, he is a good teammate, I like to work with him.”