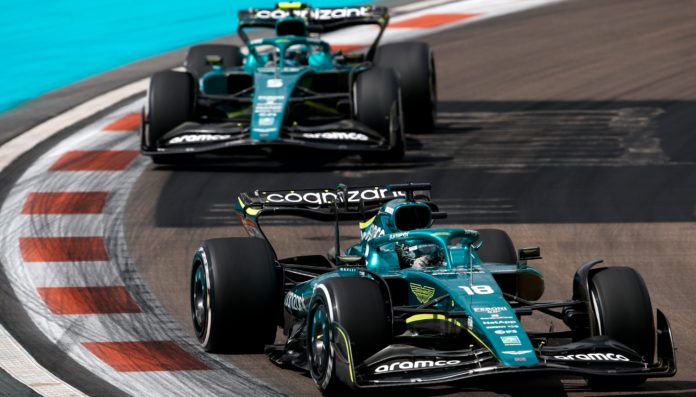 According to Michael Schmidt of Auto Motor und Sport, Aston Martin would bring “half a new car” to the Spanish Grand Prix.

Aston Martin not only broke their duck in Imola, but did so with a double points haul, after failing to score in the first three races of the season, finishing P12 in all three.

They were seeking a second in Miami when Sebastian Vettel retired due to collision damage, leaving Lance Stroll in 10th place with a single point.

Lawrence Stroll did not sign up for six points after five races when he bought the F1 team and rebranded it Aston Martin, thus the team is apparently planning to spend a significant portion of their 2022 budget on introducing “half a new car” at the Spanish Grand Prix.

Schmidt of AMuS reports Aston Martin engineers have told him that the AMR22 will undergo significant upgrades at the Barcelona race, which will be “quite noticeable.”

With a smaller rear and wider sidepods, the car might resemble the championship-leading Ferrari F1-75.

Schmidt said: “Maybe it will be a Ferrari copy, let’s see.”

It wouldn’t be the first time Aston Martin has imitated a design; in 2020, the team raced a ‘pink Mercedes.’

The FIA responded by cracking down on counterfeit designs, so while the updated AMR22 will resemble the Ferrari, it will not be an identical replica.

Schmidt, however, stated that the car will not be completed in time for the Barcelona race due to a lack of material the team requires to construct the chassis.

As a result, the team may only have enough parts to update one of the drivers.

According to Schmidt, “technical director Andy Green is convinced there is more to the car than just midfield positions – therefore, a completely renewed AMR22 is already in the works.

Aston Martin is hoping that the new half-car will solve their porpoising issues, as the team previously acknowledged that they have to run at a higher ride height than they would like to avoid it.

As a result, they are losing downforce and lap time, putting them in ninth place in the Constructors’ Championship.