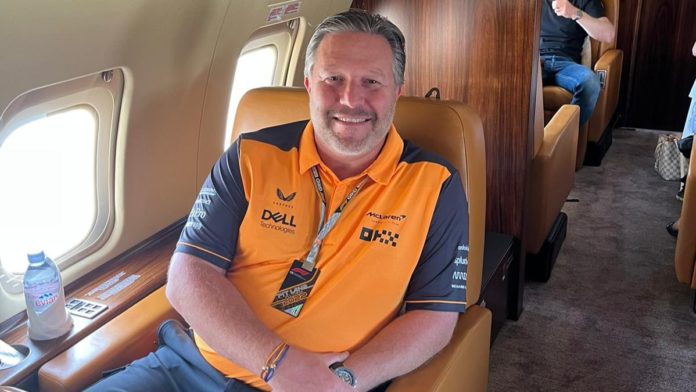 Although Zak Brown would “love to see it happen,” he does not think that an American driver or team will make F1 successful in the United States.

With Miami joining Austin and Las Vegas on the 2023 calendar, F1 is currently experiencing a surge in popularity in the United States.

However, it has been more than 15 years since an American competed in a full-time F1 race.

Red Bull recently attempted to gain IndyCar driver Colton Herta a spot with AlphaTauri for the upcoming season, but their efforts were unsuccessful since the FIA refused to provide him an exemption for a superlicence.

The CEO of McLaren Racing, Brown, stated that while having an American driver and a US-based team on the grid would be fantastic for F1, he did not believe they were absolutely necessary to the popularity of the sport in the US, as seen by its current success.

“I think it would be great for both of them to happen, it would further enhance F1 here,” said Brown at Laguna Seca earlier this month.

“But we don’t have either today, and look how popular F1 is now in America.

“So I’d love to see it happen, but I don’t think it has to happen. Because F1 is hot today without it.”

Many in American racing circles criticized the FIA’s procedure after Herta’s superlicence application was rejected, despite his IndyCar track record.

Alexander Rossi, who competed for Manor in five F1 races in 2015, claimed that Herta’s opportunity to transition to the F1 world was unfairly denied to him due to the “greed” of prior judgments made over superlicence eligibility.

Max Verstappen, the current world champion, and Kimi Raikkonen, the winner of the championship in 2007, were both prevented from graduating from F1 under the current system, Brown himself said, underscoring the need for reform.