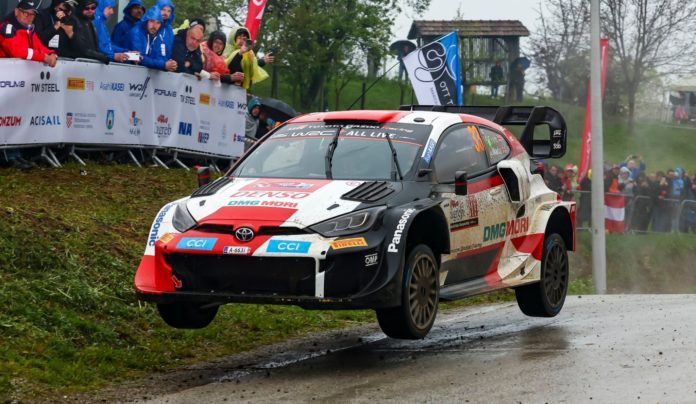 Elfyn Evans and co-driver Scott Martin will start round four of the World Rally Championship on the front foot after a blistering third and final run of the Rally de Portugal shakedown circuit.

Evans took the lead late in the race, but his timing of two minutes 56.1 seconds through the 4.55 kilometres of ‘Paredes’ was four tenths of a second faster than M-Sport Ford driver Craig Breen.

Evans, a Welshman, is desperate for a good performance at the championship’ first major gravel event this weekend, and his road position on the first day of action on Friday might be crucial. Evans, a two-time WRC runner-up, conceded, “It’s always a help, so we need to make the most of it.”

Breen expressed his confidence on the loose in the lead-up to Portugal. He had a good pre-event test and knows the Puma Rally1 well on gravel, having logged a lot of kilometres in it throughout the car’s development and testing.

“The car feels nice and I had a nice feeling,” said the Irishman at the end of his first run through ‘Paredes’. “But for sure, we have got some things to improve, but it is all okay.”

After crews take part in the official start ceremony in Coimbra this evening, the actual action at Rally de Portugal begins. It’s the only new stage of the weekend, and it’s only 2.82 kilometres long.

On Friday, a tyre fitting zone is sandwiched between two laps of ‘Lousa,’ ‘Gois,’ and ‘Arganil,’ before teams tackle ‘Mortagua,’ (18.15km), and a short super special in Lousada before returning to service.