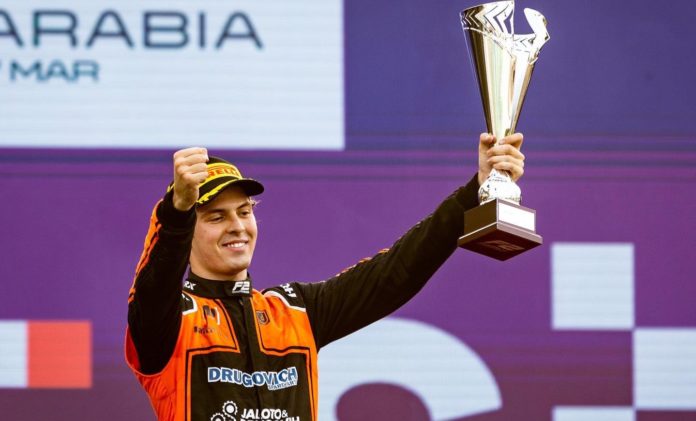 In the feature race, Felipe Drugovich won his second FIA Formula 2 victory of the weekend, crossing the finish more almost five seconds ahead of Jack Doohan.

The MP Motorsport driver, who also won the sprint race on Saturday, stormed through the pack from 10th place to take the lead on lap 27 before pulling away from the Australian.

Drugovich had a lengthier first stint than Doohan, switching to the hard tyres on lap 17 after the Virtuosi driver had pitted six laps sooner.

It worked in his favour because many of the drivers ahead of him, including Juri Vips and Pourchaire, were yet to stop or had tough stops.

Despite Doohan’s 2.4-second lead by lap 22, Drugovich kept up his aggressive pace and swept by the leader at Turn 1.

For a pit stop violation, Drugovich faces a post-race inquiry.

After colliding with Olli Caldwell early in the race, Dennis Hauger was forced to pit for a new front wing, pushing him down the order and earning him a five-second penalty.

Prema’s Jehan Daruvala became stranded on track after being struck from behind by teammate Red Bull junior Ayumu Iwasa on lap four, prompting the deployment of the safety car (DAMS).

Clement Novalak, who was on the alternate strategy and started on softs, passed Enzo Fittipaldi on lap 21 and claimed the lead with neither driver stopping.

On lap 23, Drugovich passed Roy Nissany (DAMS) for sixth, bringing him closer to Doohan, who was in third.

Sargeant finished fourth, Pourchaire sixth, and Fittipaldi seventh, all using the other approach.

Drugovich is currently 26 points ahead of Pourchaire in the standings heading into the fifth round in Monaco next weekend.