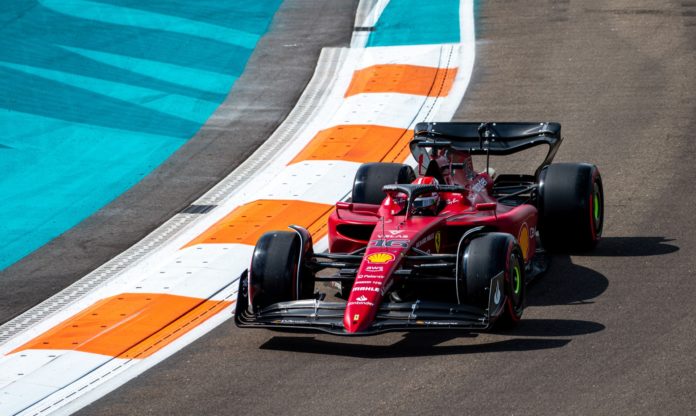 Ferrari is contemplating their first big upgrades of the season for Barcelona, after being outpaced by Red Bull in straight-line speed in Miami.

Despite leading the Drivers’ and Constructors’ standings, Ferrari is now 3-2 behind Red Bull in race wins, with Charles Leclerc trailing Max Verstappen, who has won the last two races.

The present trend indicates that Red Bull will soon take control of both championships, but the Italian giants are aiming to ward off that possibility with some F1-75 upgrades for the Spanish Grand Prix.

Red Bull had already made changes and removed some weight from the RB18 for the Emilia Romagna Grand Prix, the first of Verstappen’s back-to-back victories, and now it’s Ferrari’s turn to hit back.

According to The Race, the Scuderia plans to install a new floor on their cars at the Circuit de Catalunya, which they think would eliminate the ‘porpoising’ that has plagued them in the past.

“In the next races, it will at least be our chance to try to grow as much as we can the car by providing upgrades,” team principal Mattia Binotto is reported as saying.

“I think it’s not a surprise that we may have a package in Barcelona which will be important for us.

“As usual, I hope the package we are introducing is working as expected in order to try to catch up the current gap we’ve got compared to Red Bull.”

Following the modifications for Imola, Binotto believes Red Bull has “got a couple of tenths per lap faster than us.”

Binotto added about the Miami Grand Prix: “Red Bull were very good on the medium tyres to be as fast as us in the very slow speed corners.

“It’s something we need to assess and understand. And, in fact, I believe it’s that they have got upgrades in the last races that have made their car simply faster.”

In the Drivers’ standings, Leclerc leads title-holder Verstappen by 19 points, while Carlos Sainz will be hoping for his first F1 victory at the 146th try in Barcelona, after returning to the podium in Miami after two early departures.