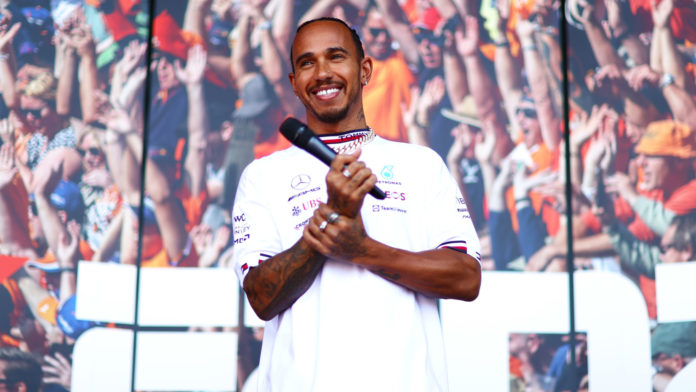 Lewis Hamilton joked that he would purchase a print of Valtteri Bottas’ butt for charity.

The restrained Bottas would not have been your first choice if you had to choose which driver on the grid would have the most famous behind.

Nonetheless, when he was filmed relaxing at home in his spa for the 2021 season of Netflix’s ‘Drive to Survive,’ the Finn became an unlikely star.

Bottas stepped up and exposed his right butt cheek to the camera, interrupting the serene picture of stunning Finnish scenery and a wooden cabin containing a spa.

Bottas’ fatal journey to the spa drew the audience’s attention more than any other viral event from a ‘Drive to Survive’ season.

Bottas has been showcasing his lighter side since his move from Mercedes to Alfa Romeo, demonstrating that he does not take himself too seriously.

Following his seventh-place finish in the first Miami Grand Prix, the Finn headed to Instagram to reveal what he was up to in his spare time.

He shared a photo of himself skinny-dipping in a Colorado creek, and the internet went crazy once more. Bottas later revealed that he would be selling reproductions of the ‘artwork’ for charity later that day, and it appears that one of his old teammates will be among the buyers.

Hamilton even went so far as to state in an interview with Sky Sports ahead of the Spanish Grand Prix that he would buy a poster and that it was one of the best images he had ever seen.

“I would, yeah, for charity, for sure,” he replied when asked if he would buy one. “I didn’t even know it was up for sale but I think it’s a great photo. It’s one of the best photos I’ve seen, actually.”