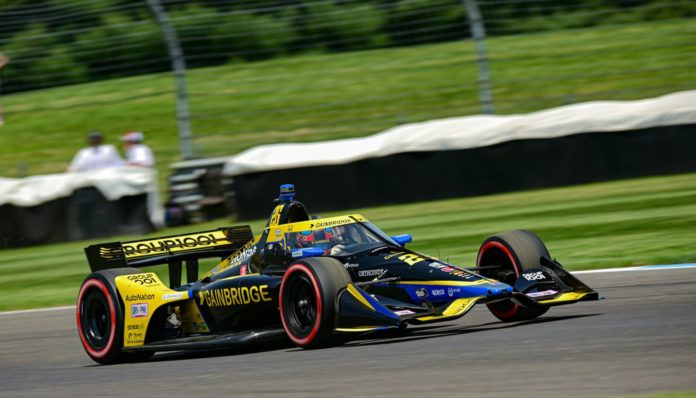 Autosport Andretti – Colton Herta, a Honda driver who won the GMR Grand Prix of Indianapolis in perplexing mixed circumstances, said he was surprised to find his car capable in all conditions.

Despite starting 14th, he led 50 of the 75 laps, defeating two drivers – Simon Pagenaud and Will Power – who have won eight of the eleven IndyCar races on the road circuit at the Indianapolis Motor Speedway.

“The most interesting thing is you never have a car that works in the wet and the dry – it’s just not possible,” said Herta, “but it happened today.

“It was very interesting. Felt comfortable in all conditions.”

Herta stated his choice to pit at the start of Lap 3 and swap his wet tyres for red sidewalled Firestone slicks was vital to vaulting himself into the lead.

“The call for slicks to wets that made the difference,” he said.

“Yeah, it was really cool. The team did a tremendous job. They gave me such an incredible car.”

Before the final stint, Herta debated with his strategist and father Bryan Herta whether to go for more reds or swap to wets, as rain had resumed and heavier storms were forecast soon.

They eventually went for additional reds, but their main competitors did the same, so when the rain began to fall, practically everyone ducked back into the pits.

In the rainy conditions, Herta revealed that part of his defence against Pagenaud was watching TV screens at the side of the track and spraying his pursuant.

While chasing Pato O’Ward for the lead, Herta made a crucial saving on a wet patch at Turn 8, the #26 Gainbridge performing a long opposite lock drift before snapping back into line, allowing Herta to catch and pass the Arrow McLaren SP driver.