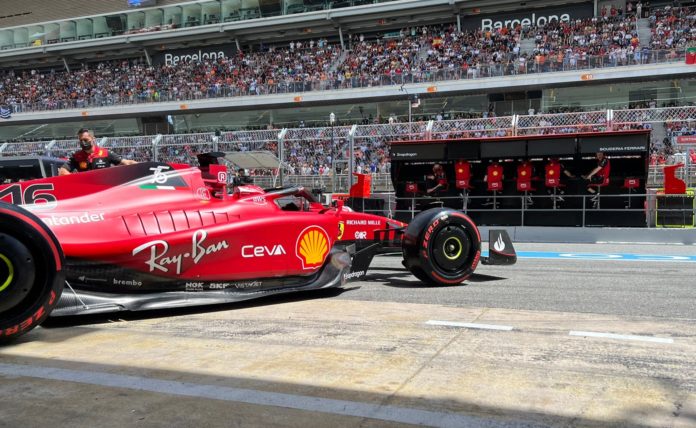 In first practise for the 2022 Spanish Grand Prix, Charles Leclerc led a Ferrari 1-2, with Max Verstappen third but losing time on his fastest run due to traffic.

The one-hour FP1 practise in Barcelona took place in scorching heat and clear skies, with temperatures hovering around 30°C in the air and around 50°C on the track, which climbed steadily during the race.

Verstappen’s first time on the hards was 1m23.163s, which he improved to 1m22.693s with two following fliers each side of Leclerc, who momentarily slotted ahead with a 1m22.820s on the white-walled rubber.

Verstappen continued to improve on the hards after a pit stop to update his front wing but not his tyres, clocking times of 1m22.143s and then 1m21.876s shortly before his 12-lap run ended and he pitted at the end of the session’s first 20 minutes.

Leclerc was the next of the 2022 frontrunners to post a time on the softs, following Verstappen and establishing a purple middle sector with a 1m19.828s – only 0.079s faster than his teammate.

After a brief pause in activity, the group reappeared for the final few minutes, completing racing runs several seconds behind the pace.

The Silver Arrows cars, which have been significantly improved for this event, had little porpoising effect during FP1 as George Russell led the way in fourth with a 1m20.50s.

Fernando Alonso finished fifth, ahead of Lewis Hamilton in the second Mercedes, after a late run on the softs while most of his competitors sat in the pits.