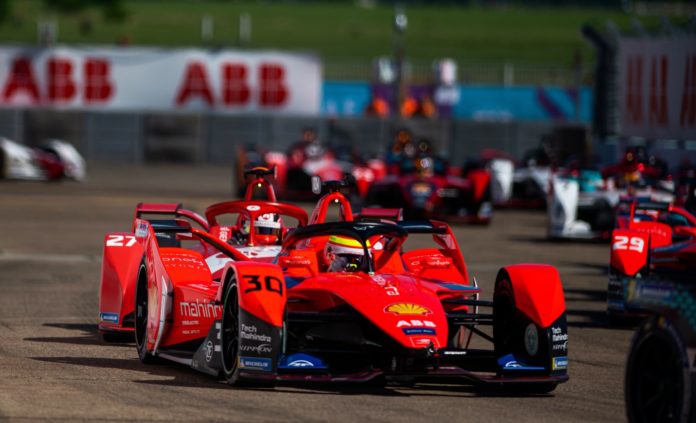 Oliver Rowland attributed Mahindra’s improved Berlin E-Prix performance to “significant” modifications to the team’s Formula E car, but blamed his late fall to seventh on “inexperience” with them.

The Yorkshireman came in 10th place, ahead of colleague Alexander Sims, who had made the final on Saturday.

Mahindra had been a constant presence among the frontrunners in practise, and Rowland took advantage of that newly discovered speed in the second race.

Rowland had climbed to fifth place in race two as he looked to be the best non-Mercedes runner, but he ran out of gas in the closing stages and lost two places to Antonio Felix da Costa and Robin Frijns – but he was able to hold off Andre Lotterer.

“I’m happy. I mean, sometimes you finish seventh with a bit of luck,” Rowland explained.

“But I think today we had really good pace and we came from behind. It’s nice to see actually, eventually having a bit of luck and just everything going well.

“I think everybody’s worked quite hard to get to where we are. We still have a lot of work ahead. But yeah, it was a nice race and I enjoyed it.”

Rowland stated that the software modifications Mahindra had made, after arriving in Monaco with braking upgrades and then bringing more tweaks to Berlin, had paid off.

Sims’ qualifying performance on Saturday, he continued, had demonstrated the results of the team’s labour, a result Rowland was pleased to see.

“It’s nice to see that the direction we’re both pushing in, and the things that we want [from the car] are making a difference,” he said.

“Yesterday, what we saw with Simsy in qualifying, it’s also nice to see from my perspective. Some people might not like that when their teammate does well!

“But the things that we’re doing and understanding are making a difference, and to do a race like that in this track is not easy. So with what we did today, I think we have to take a lot of positives.”