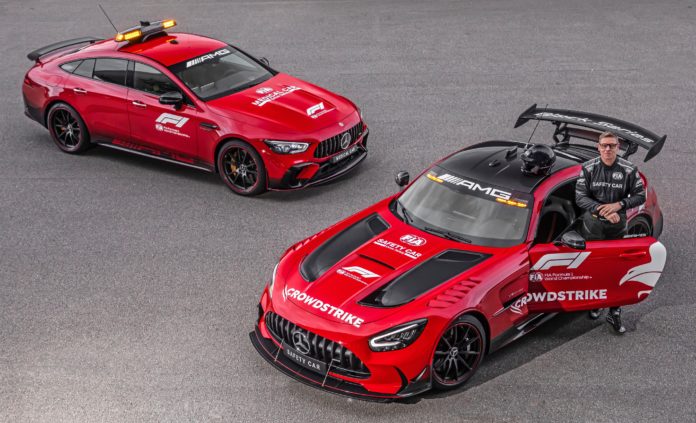 The Mercedes-AMG GT Black Series will serve as the official safety car for half of the races this season, as Mercedes and Aston Martin continue to split duties.

The Black Series replaces the Mercedes-AMG GT R that had been used as the safety car since 2015. The previous C 63 S Estate is replaced as the medical car by the GT 63 S 4MATIC+.

They are the most powerful variants of these automobiles, according to Mercedes.

The car features a new light signalling system that is built into the windscreen, as well as featuring on the rear spoiler. The rear number plate will also illuminate in the relevant colours to signal to drivers during races.

Safety car driver Bernd Maylander will be supported by co-driver Richard Darker who has access to two monitors with all the race information.

Both the safety and medical cars will be painted in the red livery that Mercedes debuted last year, with Crowdstrike as a sponsor.

The Aston Martin Vantage and Aston Martin DBX SUV will act as the safety and medical cars on weekends when Mercedes does not provide track vehicles.