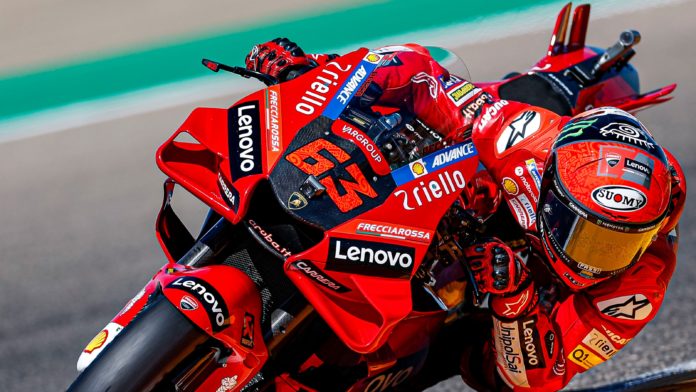 The ban on front ride height devices in MotoGP for 2023, as per Ducati’s technical director David Barana, was “not a very nice display of fairness” from its rivals.

In order to aid starts, Ducati equipped Jack Miller’s Pramac Ducati with a rear holeshot device in 2018. This marked the introduction of ride height devices to the MotoGP circuit.

The technology further evolved into a front ride height mechanism that could be utilised in a similar manner the following year, allowing the Ducati to squat its rear during a lap.

The front ride height adjusters will be prohibited for the 2023 season because to safety concerns raised by the ongoing development of ride height devices among teams and riders.

During the Aragon GP, Barana told the media that Ducati is still incensed by the decision, which the manufacturer views as its rivals simply asking to outlaw something they couldn’t develop well.

“I don’t like to talk much about this topic because of what happened with these devices,” Barana said when asked about the ride height device ban for 2023.

“We have been the first to introduce the first system for the start, for the launch procedure. The others followed.

“We developed the second step of the system, that it was a dynamic system that allowed you to lower the bike during bike operation.

“And the others followed. Next step was to expand this capability into the front of the bike, and at a certain point someone came up with a proposal to ban this kind of device.

“It was clear that this device was already in use from one manufacturer – Ducati – and at a certain point Ducati declared to the other manufacturers that we are using this kind of device you are going to ban.

“But looking at this story, I can say it does not beam a very nice display of fairness of at all, because instead of trying to catch up with developing your bike it’s much easier to ban something that only one has.“ Barana stated.