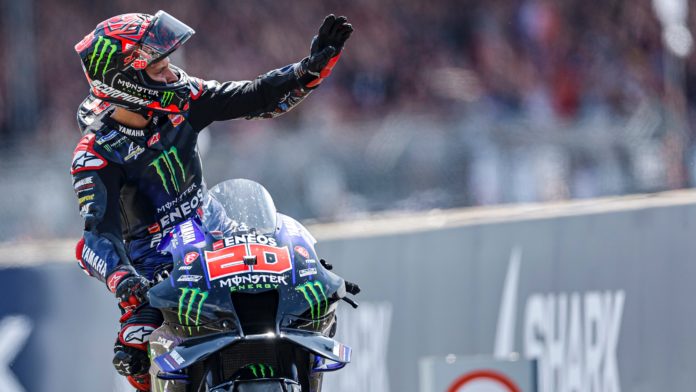 After struggling in Sunday’s French Grand Prix, reigning world champion Fabio Quartararo admits he is “by no means the favourite” for the 2022 MotoGP title.

The Yamaha rider was anticipated to challenge for victory at Le Mans on Sunday after setting the fastest race pace throughout the weekend’s practise sessions.

However, he had a bad start from fourth on the grid and battled to overtake, slipping to eighth at one point before recovering to sixth, thanks to many crashes ahead of him.

Despite leading the championship by four points over Aprilia’s Aleix Espargaro, Quartararo claims he cannot be regarded a favourite for the victory because he cannot risk making any mistakes on the 2022 Yamaha.

“No, I’m not the favourite by far,” he said when asked if he thought he was still the leading title contender.

“The only thing I can do is make no mistakes. If I make no mistakes I can be there, because our pace in every GP we go – apart from a few like Austin and Qatar – looking at the pace of Jerez, with Pecco we were the fastest.

“Here in the pace, for me I was the fastest. But as soon as you make a small mistake, you are gone.

“I remember one race last year when Pecco started one race in Portimao in P11, he was able to make overtakes.

“In the second race I was in the same situation in P6, and I stayed in P6. I don’t know what I can do, to be honest, because I am pushing myself to the limit.

“I am on the limit everywhere. But I cannot even try.

“This is the most frustrating thing. You are in the last lap, and even if you are one centimetre behind they accelerate and pull away.

“And then you lose one tenth. This is why I don’t feel the favourite this year.”

Quartararo went on to say that fourth place at Le Mans was not his “true” position, and that he was fortunate to have seen both Suzuki riders and long-time leader Bagnaia crash out of good finishes.