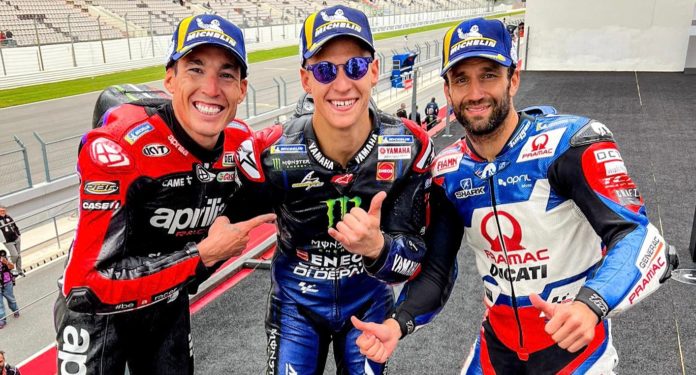 Quartararo had not won a race since Silverstone 2021 last August, but on the fourth lap he overtook early leader Joan Mir and romped to his first win of the season.

Mir blasted away from second on the grid to take the lead for the first time since his championship-winning season in 2020, while Quartararo jumped from sixth to third.

Pramac polesitter Johann Zarco was sandwiched between the two champions, but Quartararo snatched second from him into the Turn 3 right-hander as Mir surged nearly six tenths clear at the front.

Zarco was initially pushed back to sixth by factory Ducati rival Jack Miller and Alex Marquez’s LCR Honda, but he swiftly climbed back into the podium positions before the end of the second tour.

On the second lap, Quartararo chipped away from Mir’s lead and was soon within striking distance, with the Yamaha rider making his move into Turn 1 on the fourth tour after nailing his run out of the sweeping downhill final corner and taking advantage of the Suzuki’s tow.

Quartararo quickly established a lead of nearly a second, which he would maintain while Mir fell back into Zarco’s hands.

At the start of lap 16, Zarco made a fruitless attempt to pass Mir for second, the Pramac rider running wide at the first curve.

But he made the pass stick the second time, forcing Mir to fight Miller for the final podium spot.

After a fierce duel for sixth in the closing stages, Marc Marquez defeated his LCR Honda-mounted brother Alex Marquez by 0.020s across the line.

After a big crash in qualifying, Bagnaia was cleared to race this morning.