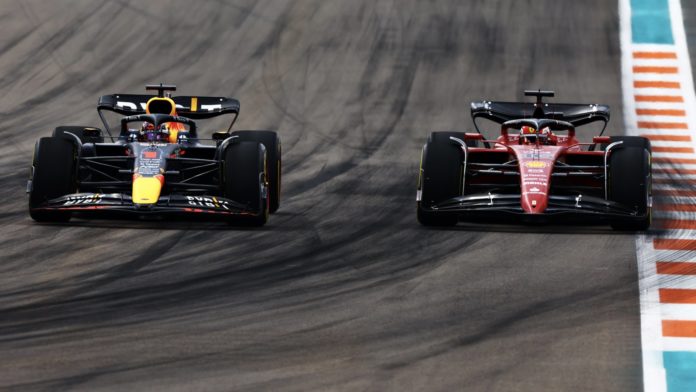 Ferrari believes it is only 0.2 seconds behind Red Bull each lap as it works to close the gap with its Formula One adversary.

Red Bull’s upgrade package, which included aero adjustments and weight reduction, appears to have provided the team a speed advantage at the Emilia Romagna Grand Prix.

Despite a terrible start in the sprint, Verstappen dominated the Imola weekend and won again in Miami last weekend to narrow down the early points lead that Charles Leclerc had established.

Ferrari has so far refrained from providing any changes, but its first substantial development package is due for the following race in Spain.

“In terms of performance assessments, and how much they [Red Bull] developed compared to us, is that a concern? I would say not,” he said.

“I don’t think that the difference is huge. It is a matter of maximum a couple of tenths and we should not forget that [in Miami] we locked the front row.

“In qualifying we had a better performance compared to the Red Bull, so overall, in a weekend, I don’t think there is much difference between the Red Bull and the Ferrari.

“If there is a concern, it is how much they are developing considering the budget gap. But more than a concern, maybe it is a hope because at some stage they will need to stop.”

Apart from the modest speed difference between the Ferrari and the Red Bull, the largest difference is in how the two vehicles attain their lap times.

On the straights, Red Bull has always been faster, while Ferrari has always had the upper hand in turns.

However, Leclerc believes Ferrari should delve more into why their tyre degradation currently appears to be worse than Red Bull’s, despite the fact that it was once a crucial strength.