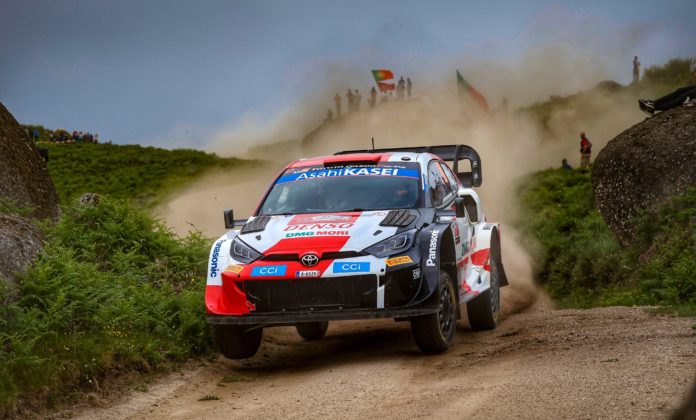 Kalle Rovanpera has increased his World Rally Championship points lead after winning Rally Portugal for the third time in a row.

After holding off a brief assault from teammate Elfyn Evans, the Toyota driver won the inaugural gravel rally of the new Rally1 hybrid era by 15.2 seconds.

On the weekend that the WRC celebrated its 50th season, Rovanpera sealed the victory by winning the last powerstage.

Dani Sordo of Hyundai took the final podium spot after a fierce battle with Toyota’s Takamoto Katsuta that lasted until the final powerstage, when the Spaniard overtook his competitor.

The duo had performed well during the rally and were one of four Rally1 drivers to avoid any problems over the four days.

The rally belonged to Rovanpera, who put in yet another immaculate performance, with this victory possibly the most meaningful to yet given the disadvantage of having to function as road sweeper on Friday’s sandy sections.

Through Saturday, the Toyota duo battled for the lead, with Evans extending his lead to 18.4 seconds until Rovanpera won a pair of stages to seize the lead on stage 15 when heavy rain fell.

Rovanpera overcame a 9.9-second deficit to take a four-second lead in the day’s last Super Special.

Evans took the rally lead on Friday morning, leapfrogging Neuville, who had won the super special opener on Thursday.

On stage 4, the Welshman lost the lead to M-Sebastien Sport’s Loeb, who jumped from sixth overall to first with a stage win.

However, Loeb made a rare driver error on stage 5, sliding into a wall and causing terminal damage to his Ford Puma, forcing the nine-time world champion to quit.