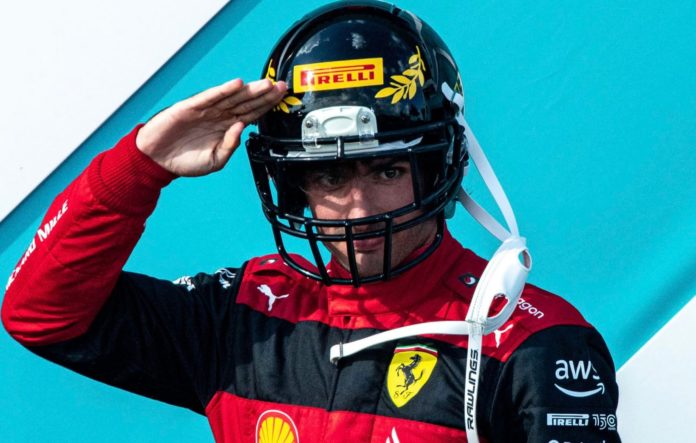 Former Formula One driver Jan Lammers believes Carlos Sainz might have done more to hold Max Verstappen in second place at the start of the Miami Grand Prix.

With Charles Leclerc securing pole for the Miami Grand Prix and Carlos Sainz making it a Ferrari front-row lockout, Ferrari appeared to be on track to give the perfect answer to a poor outing at Imola.

On race day, though, Red Bull would shine.

Verstappen was able to pass Sainz early on, and as Leclerc began to struggle with graining on the medium tyre, Verstappen performed the overtake on Lap 9, claiming victory and cutting Leclerc’s Drivers’ Championship lead to 19 points.

Lammers praised Verstappen’s approach to the race start, which he said helped set the Dutchman up for his victory drive.

“It all started at the start, because there he (Verstappen) showed how to do it,” said Lammers while speaking on the NOS Formule 1-podcast.

“It looks so subtle and you think he has a better start than Carlos Sainz, but he didn’t have that at all. That top-four went away fairly evenly, but he really made the difference with the braking.

“It was really great that he kept Carlos on the inside as tight as possible. Carlos had no momentum. He did it in a classic, great way.”

However, Lammers believes Sainz should have done more for his Ferrari team and teammate Leclerc by making Verstappen’s life more difficult from the start.

Sainz was unable to make an impact on the race, finishing third, however his podium position would have been in jeopardy if Sergio Perez had not experienced engine troubles that resulted in a loss of power.

“Carlos should have gone much more to the outside at that start and given Max much less space, because if Max had to go even wider he would have had very little grip,” said Lammers.

“The fact that Carlos let himself be passed like a lame duck was very strange. Carlos could have done better.”